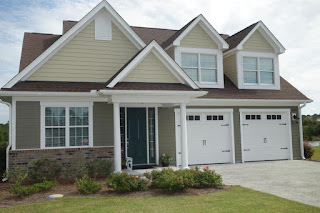 This lovely home features an open floor plan with many upgrades to the original building design. In addition to the master suite, there is one bedroom and an office/den downstairs. The kitchen/dining area/great room all flow into each other for easy entertaining. Walls and flooring are all very neutral, countertops are granite and kitchen appliances are stainless steel. The bonus room/bedroom upstairs has a full bath, a wet bar and plenty of storage. The four season room and patio overlook a beautiful pond. St. James Plantation is a gated community with many amenities including 81 holes of golf, tennis, full service marina on the ICW, private oceanfront beach club, biking/walking trails, indoor/outdoor pools and athletic facilities. Club membership is active.

Why Brexit is great news for U.S. homebuyers

It's now even cheaper to get a mortgage.

The drop comes in the wake of the U.K.'s decision to leave the European Union. The historic vote sent the yield on the U.S. 10-year Treasury, which serves as benchmark for consumer loans, tumbling to 1.45% this week.

"Obviously it's a good time for anyone who is the market for a home purchase or had been on the proverbial fence about refinancing," said Mark Hamrick, senior economic analyst at Bankrate.

The U.K.'s decision to separate from the European Union on Friday triggered a massive selloff that erased a record $3 trillion from the global stock market on Friday and Monday.

Some experts expect the fallout from the vote to be a boon for the U.S. real estate market as more foreign buyers seek out a safe haven to park their cash.

The drop in home loan rates can provide some breathing room for wanna-be buyers in the U.S. who have been facing rising home prices and tighter lending requirements.

Low inventory and high demand have pushed up home prices throughout the country, creating an affordability issue.

Home prices increased 5% in April from the year prior, according to the latest S&P/Case-Shiller National Home Price Index released earlier this week.

"When you are seeing this continuous 5% increase year over year in home prices without an accompanying increase in either wages or incomes, what can't go on forever does not," Hamrick noted.

More than three years and $22-million in the making, the Long Beach Road Extension project has reached another milestone with the opening of the road connecting the old and new sections of the highway.
Expanded lanes on the new bridge at Jump and Run Creek and the connector road just east of the new Food Lion opened Wednesday morning.
Although it’s shorter than a football field, the connector road at Coldwell Banker Sea Coast Realty is a significant part of the project and is expected to help relieve congestion along N.C. 211 at the intersections of old Long Beach Road and at the new Long Beach Road Extension (N.C. 133).
The connector gives drivers going between Southport and Oak Island an alternative route. It also makes it easier to access Surf Cinemas and nearby businesses, particularly when traveling from Oak Island.
Engineers with the N.C. Department of Transportation will continue tweaking the timing of traffic signals in the area, which are monitored with cameras and connected by fiber-optic cable.
David Byrd, a DOT inspector, said state officials insisted that contractor Balfour Beatty open the roadway by Memorial Day.
The newest section of roadway has opened but is not finished and is marked with paint. After crews apply the final layer of asphalt, the road will be permanently marked with highly reflective thermoplastic fog and center lines. The final layers of asphalt will be applied at night during the next month, Byrd said.
Except for a few turn lanes, the last layers of asphalt are finished along N.C. 211, Byrd said.
The project includes 2.2 miles of new roadway that ties Long Beach Road to N.C. 87/N.C. 133 between Southport and Boiling Spring Lakes. For drivers going between Oak Island and Boiling Spring Lakes, the new road eliminates a series of turns and traffic signals that are often congested even during the off-season.


Byrd said the contractor intends to finish paving, striping, landscaping and all other aspects of the job before Independence Day.